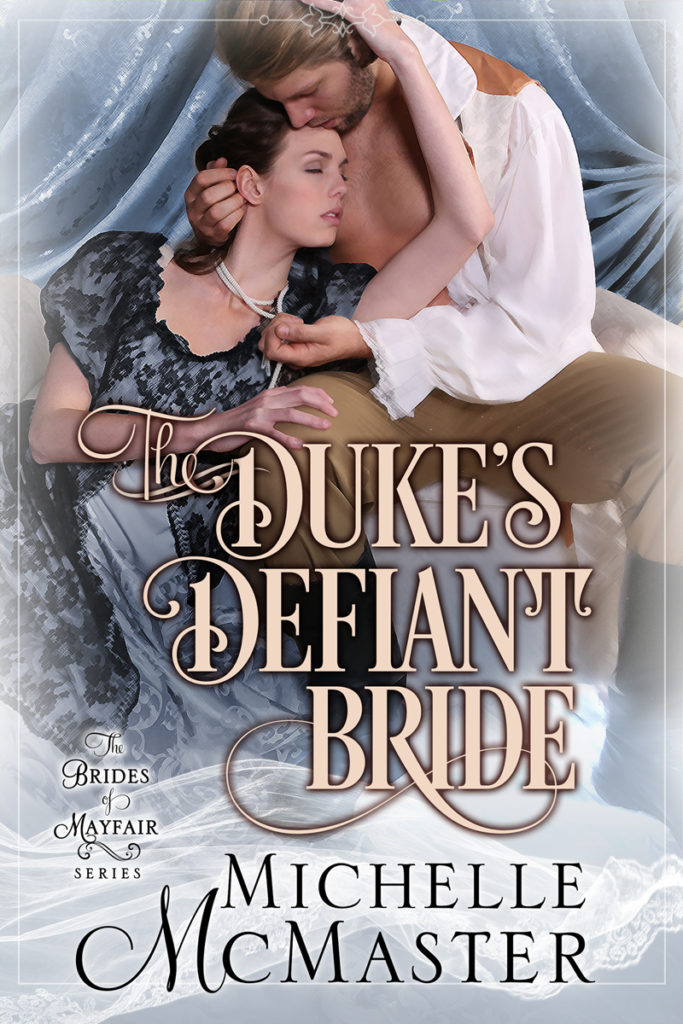 Part of the Brides of Mayfair series:

Carver Adams, the powerful Duke of Hawksmoor and brave war hero, makes a shocking discovery at a glittering Mayfair ball.  The one woman he could never forget––the infamous spy, Lady Blade––is very much alive. Though he balks at the idea of teaming up with the woman who betrayed him and his men during the war, the beautiful former French spy may be the key to his next undercover mission.

Juliet Reed never wanted to love the handsome British army captain. After an unspeakable tragedy changes her life forever, the half-English and half-French young woman became a deadly spy for the French, known as Lady Blade.  When she is taken captive by Captain Adams, the two enemies must fight against the heated attraction that burns between them, or betray everything they have fought for.

Now, a year after the Battle of Waterloo, the two former lovers––and former enemies––must re-unite in order to stop a dangerous plot which could cost many innocent lives.  But with their volatile past and their dangerous passion for each other re-ignited, will the two star-crossed lovers risk everything to trust each other once more?

Carver Adams, the Duke of Hawksmoor, had a secret. Two, actually—and either one of them would knock the ton on its head if the truth ever came out.

As he stepped into the glittering ballroom of Bellamy House, he scanned the room for his host and spotted him immediately.

His old friend, Beckett, the Earl of Ravenwood, took notice of his arrival and approached with champagne in hand.

“Your Grace,” Beckett said, bowing slightly. “Welcome. Though I’m a bit surprised to see you here tonight. Are you finally in the market for a bride?”

Carver chuckled. “You never quit, do you, Beckett.”

“Certainly not. If you are, Isobel would be happy to help. Lady Weston would, too, I suspect. Look, there are Alfred and Prudence, now.”

Carver turned to see Alfred, Baron Weston and his beautiful wife, Prudence, taking the final steps in a lively quadrille in the center of the ballroom. They turned and locked eyes with Carver, smiled and approached.

After the appropriate polite greetings and light conversation, Isobel—looking stunning with her blond hair woven with pearls in the popular Grecian style—regarded Carver over the rim of her champagne glass as she sipped.

“Tell me, Your Grace, is it true? Are you on the hunt for a duchess at last?”

He was on the hunt for something, or someone, Carver mused to himself. But men like him always were.

“There is quite a crop of beautiful young ladies to choose from here this evening,” Alfred added, scanning the room. “Simply take your pick.”

His wife cocked her head to the side. “I do beg your pardon, Alfred, but what of the young ladies? Do they not have a say in this? Perhaps they don’t wish to have a husband. Even a duke. Pardon my saying so, Your Grace.”

Prudence, Baroness Weston, was known for her independent speech and intelligent mind, which was no surprise, considering she ran a successful school for young ladies who came from troubled backgrounds, or even the streets themselves. Alfred had met Prudence one evening on the darkened streets near Drury Lane as she was recruiting students for her school. He had mistaken her for a streetwalker, and the rest was history.

“I am not seeking a duchess this evening, Lady Weston,” Carver replied with a warm smile. “But if I were, you and Lady Ravenwood would be the first I would consult for advice and recommendations. You are both modern-thinking ladies, and as you know, I have come to the dukedom rather late in life. Truth be told, I still feel like nothing but a lowly captain of the West Devonshire, and nothing more.”

“Forgive me, Your Grace,” she replied with a charming glimmer in her eye, “but as my husband tells it, Captain Carver Adams was quite a distinguished soldier. You led many brave missions in the Peninsula and saved countless English lives. You are a true hero.”

Carver thanked her but looked away from the compliment, for there was one mission where he had failed catastrophically—the mission to escort a beautiful French spy, Lady Blade, to his superiors at Villarosa.

Two-and-a half years later, those hellish events still haunted him in the darkest hours of the night. The explosions… The screams of dying men...

And of course, the beautiful Lady Blade haunted him most of all.

After the war, he’d returned home, intending to resume his role as estate agent for his cousin, the Duke of Hawksmoor, but upon Carver’s arrival, he was shocked to find the young duke had been taken gravely ill. Carver’s cousin died soon after, and with no heirs of his body, Carver had inherited the title.

No one was more surprised than he. Suddenly, Carver found himself in uncharted waters, learning the ropes as he went. Thankfully, the duke’s aged valet had taken Carver under his wing. He taught him everything from how to dress, to perfecting his table manners and making small talk with the aristocracy, of which Carver was now part.

There were many times he longed for his old life as a soldier, living rough in the hills of the Peninsula, commiserating with his men over a strong cup of tea and a smoke.

To that end, the ton would be surprised that the Duke of Hawksmoor was still involved with the army and took orders from a man far beneath him in the social hierarchy. But Carver wouldn’t have it any other way.

In fact, part of the reason he was here tonight at Beckett and Isobel’s ball was to receive new orders from his old spymaster, Major Nye. Of course, Major Nye was now known as Mister Nye, a successful merchant. But Carver, Beckett and Alfred still addressed him by his prior rank.

“Thankfully, the war is over now,” Alfred commented, “and Boney is safely tucked away at Longwood House on Saint Helena.”

“Yes, well we all thought he was safely tucked away on Elba,” Beckett mentioned, “and look how that turned out. The Allies should have known better than to allow a deposed emperor to walk about a Mediterranean island as he pleased. Didn’t take him long to plan his escape, on a ship aptly named the Inconstant.”

“Come now, Becks,” Alfred said, “if it wasn’t for Napoleon’s escape from Elba, we wouldn’t have been able to attend the Duchess of Richmond’s ball. I daresay there’s nothing lovelier than Brussels in June. Except for you, my dear.” He gallantly kissed his wife’s hand.

“If Napoleon escaped once, do you think he might try again?” Isobel asked.

“I would put nothing past him,” Carver answered truthfully. “As Beckett, Alfred and I can attest, he is a monster whose only desire is power. If he had the chance to escape again, I’m sure he wouldn’t hesitate.”

“Carver’s right,” Beckett said. “There is talk that Napoleon still has supporters all over Europe, loyalists who would do anything to see him back on his throne.”

Prudence frowned. “If he regained his position as Emperor, I daresay I might be tempted to pick up a musket and march off to war, myself.”

“A noble and brave sentiment, dearest wife,” Alfred said, raising his glass in her honor. “But this is all speculation. There is no proof that Napoleon’s factions are mobilizing, and unless the threat becomes real, we must all put it from our minds.”

Prudence sighed. “Well. Let us hope that it does not become real, and that Napoleon stays where he belongs, far away on that remote island in the middle of nowhere. What do you say, Carver?” When he didn’t answer, she touched his arm. “Dear me, you look white as a sheet. Are you all right, Your Grace?”

Carver struggled to maintain his composure, for he felt as if he were slipping into one of the dreams which tormented him.

A beautiful, dark-haired woman stood across the ballroom conversing with a nobleman. She wore an exquisite gown of blue satin with a delicate black lace overlay, almost exactly like one Carver had seen in the Peninsula over two years ago. Sapphire and diamond earbobs sparkled in the light of the chandeliers, and her neck was long and slender beneath her upswept hair.

Her head turned and Carver beheld her profile. Though he initially thought his eyes were deceiving him, now there could be no doubt.

The woman standing across the ballroom was Lady Blade—the cunning and enigmatic French spy who had been haunting his nights for just over two insufferable years, and counting. He had thought she was dead, or perhaps in France somewhere, still spying for the enemy. But here she was in London, in the flesh, and his blood was suddenly pounding hotly through his veins.